Name of the study

Distal rectal cancers have a tendency to spread to lateral lymph nodes, especially in cT3/T4 rectal tumours. The lateral node study consortium conducted a retrospective multicentre study with a selection of 1216 patients with a cT3/T4 rectal tumour and found that patients with enlarged lateral lymph nodes (LLN) of ≥7mm have a considerable chance of local recurrence (19.5%) despite neoadjuvant treatment.

A second analysis, which included the patients with a restaging MRI after chemotherapy (CRT), showed that if the LLN declined to ≤4mm in the internal iliac compartment and ≤6mm in the obturator compartment, these patients did not develop a lateral local recurrence (LLR) in 3 years after the surgery. However, patients with persistently enlarged LLN have an extremely high risk of 52.3% of developing a LLR.  A lateral lymph node dissection (LLND) lowers the rate of LLR considerably, but is a difficult surgical technique in which nerve sparing is essential to reduce morbidity. Moreover, it is suggested that radiotherapy target volumes are variable in lateral nodal disease and can differ between national hospitals.

It is therefore important to develop standardized radiotherapy regimens, so that enlarged LLNs receive adequate irradiation; this will possibly lead to more response and therefore a lower risk of LLR and less need of a LLND. In patients with insufficient response after CRT, a LLND seems to be effective to prevent LLR.

To decrease the LLR rate by introducing standardized radiotherapy protocols and selective LLND with nerve-sparing techniques. The quality of life of patients will also be evaluated.

All patients with rectal cancer and one or more enlarged lateral lymph node(s) (a short axis ≥7mm) in the internal iliac or obturator compartment measured on the initial MRI, will be included. Exclusion criteria are patients younger than 18 years old, previous pelvic irradiation, a previous lateral lymph node dissection for a pelvic malignancy, synchronous metastases, synchronous colon cancer with a higher stage than the rectal cancer, other malignancies in the previous 3 years which could influence oncological outcomes (these patients need to be discussed with the research team before inclusion), an absolute contraindication for general anaesthesia, pregnancy or familiar adenomatous polyposis (FAP).

The sample size is based on the 3-year lateral local recurrence rate of 15.6% in low cT3/4 rectal cancers with nodes of ≥7mm after CRT + TME only (without LLND). This data is based on the multicentre Lateral Node Study.

Initial MRI images are uploaded to be peer reviewed when at least one enlarged lateral lymph node (≥7mm) is suspected by the local radiologist.

Patients will receive a predetermined standardised (C)RT protocol and if the lateral lymph nodes have insufficient response on the restaging MRI (>4mm in internal iliac compartment or > 6 mm in obturator compartment), patients will be offered a LLND and if necessary, referred to a tertiary centre for the procedure. If patients have a clinical complete response (cCR), patients can be included into a Watch & Wait follow-up protocol.

This is a prospective registration study. Therefore, patients will receive the normal standard protocol of care as they would outside of the study. The indicated surgical treatments are offered to the patients but not compulsory. 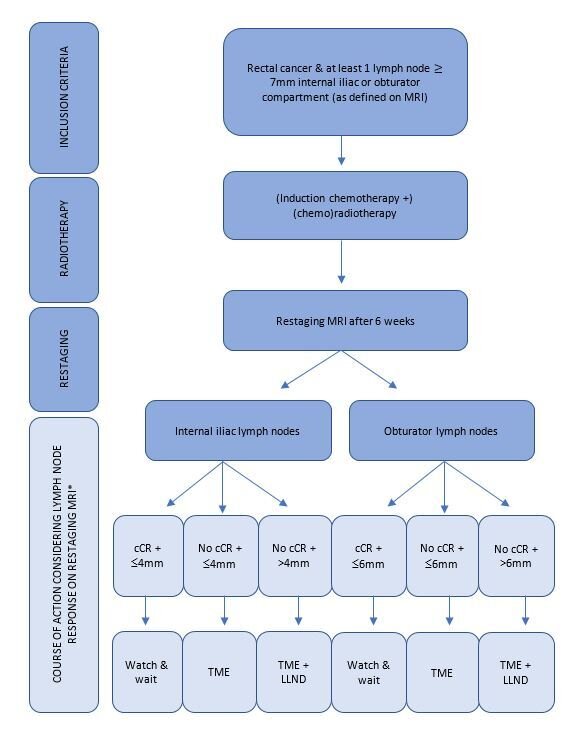